This consultation document is about gathering views from the public on proposals to improve the crossing facility for cyclists across Mare Street, between London Lane and St Thomas’s Square.


Why We Are Consulting

The Council is committed to making Hackney’s roads safer for everyone living, working and visiting the borough. Creating an environment that will encourage more walking and cycling is a key part of the Council’s transport vision and an essential part of Hackney’s Transport Strategy.

In spring 2013 the Mayor of London published his Cycling Vision for London – a 10 year strategy with approximately £1bn of investment, to increase the levels of cycling in London. One of the primary objectives of the strategy is to create a “tube network for the bike” – a mixture of fast commuter cycle routes offering dedicated cycle facilities on key main routes, complemented by a number of “Quietways”, which together will form a network of direct, joined-up cycle routes throughout London.

One of the key objectives of the Quietway routes is to link destinations, following backstreet routes, through parks, along waterways or treelined streets. The Quietways aim to overcome barriers to cycling, targeting cyclists who want to use quieter, low-traffic routes and providing an environment for those who want to travel at a gentler pace.

A number of key issues have been identified along the route and Transport for London (TfL) has provided the Council with funding to make improvements. These include improving or upgrading specific locations such as junctions and crossings in order to improve safety and visibility and reduce the potential for accidents.

Hackney Council is now consulting residents and businesses on a proposal to provide a safer link for cyclists using the Quietway 2 route across Mare Street.

In addition to meeting the objectives of the ‘Quietways’, encouraging the use of cleaner and greener transport options (particularly cycling and walking) and reducing non-essential private car journeys are key long-term objectives for the Council due to the wide range of benefits these transport options can bring, including:

• Creating a successful balance between pedestrians and other modes of transport,

in order to improve the pedestrian and cyclist experience

More information on the Quietways can be found at:
https://tfl.gov.uk/travel-information/improvements-and-projects/quietways

1 a. Closing London Lane at its junction with Mare Street to all traffic except cyclists and emergency vehicles. This will provide a safer junction for all users. The junction will be raised and narrowed to improve pedestrian accessibility and encourage cyclists to slow down when approaching Mare Street. Bollards will be installed to prevent vehicles from using the junction illegally.

b. An alternative measure could be to install a raised junction as above with ‘No Entry’ for vehicles from Mare Street. Vehicles would be allowed to turn left from London Lane, but right turns would be banned to keep the central refuge clear for cyclists.

Thomas’s Square, but cycles will be allowed to turn right.

3 The existing islands on Mare Street will be widened to provide a safer central refuge space for cyclists waiting to cross the carriageway.

4 There will be a new island on Mare Street to protect cyclists turning right on to the northern arm of St Thomas’s Square. Extra protection is needed as other vehicles travelling north on Mare Street are also able to turn right (see point 2. above) 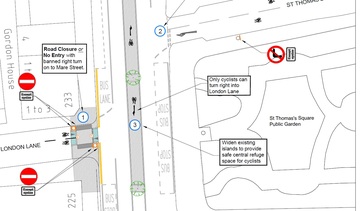